I just finished Bike Nonstop US, a 3,500 mile, mixed terrain race across the United States. Here I will share details about the gear and bike I used for the event, and some reflections on the choices I made. My goal with this post is to give an example of the type of bike and gear that can be used on a long distance race or bikepacking trip. I hope this helps people in the future who are thinking about participating in Bike Nonstop or anyone wanting to try bikepacking.

I had a compelled last minute change in bike choice, which is rarely a good situation to be in before a bike race, especially one of this length and difficulty. After flying into Oregon almost 3 weeks before the start of the race, I opened my bike carrier and discovered a full separation in the frame of my 2016 GT Grade at the seatstay bridge. I'm not sure when this damage occurred. It might've been there previously and I didn't notice, but in any case, I couldn't undo it so I had to figure out how to move forward. This is the same bike I rode from Madison, WI to Corvallis, OR the year before, and Strava tells me it has over 20,000 miles on it. It lived a good life, but I was a bit worried about finding a new bike, being this close to the start date of the race, let alone being comfortable riding it for 3,500 miles.

I was relieved to find a last-resort option in case I needed it: My father in-law's custom Independent Fabrications steel touring bike. It would fit me and would be a decent option for the event.

That being said, I needed a new bike anyway, so I looked online for local bike shops that had something in stock. My criteria for a new bike was the following:

After some searching, River City Bicycles in Portland, OR had a bike in stock that fit my criteria, with a little extra money on top to expedite the build since it was still in a box in their warehouse. Here are some of the specifications after I made it ready for the race. 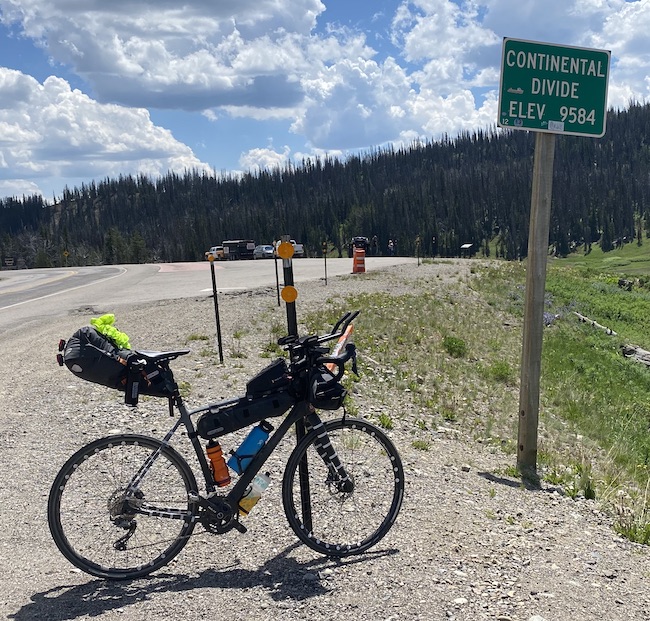 My gear choices were similar to what I brought on my tour last year, with the exception of my sleep and hydration setup. 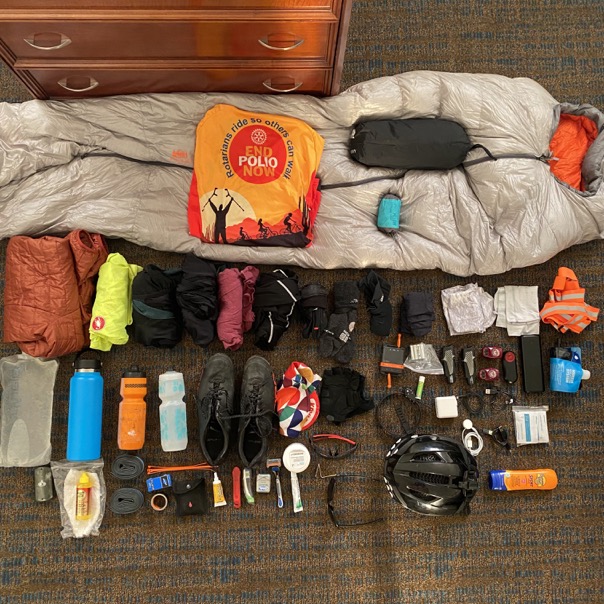 I had planned to stay in hotels as much as possible but still brought a sleep setup in case I needed it. This is different from last year, where I brought a full tent and expected to camp most of the time. 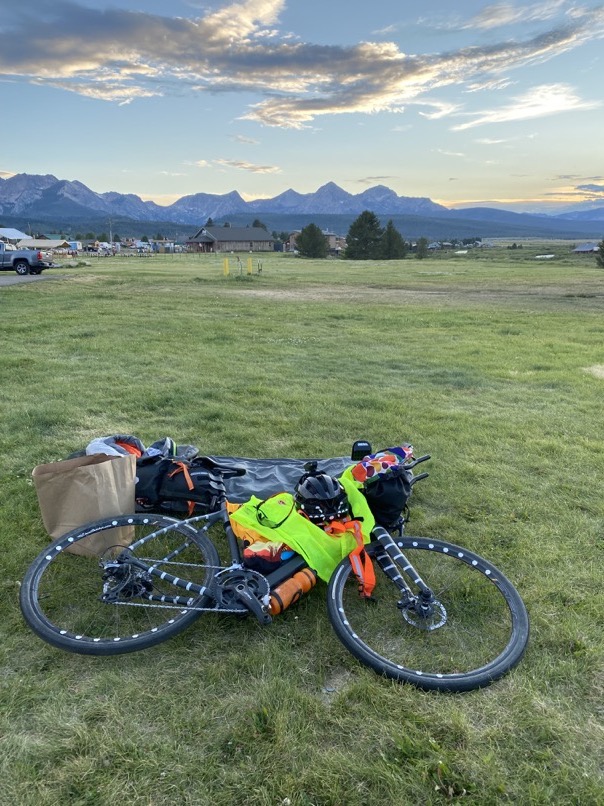 In addition to the gear below, I had also mailed a new chain and tire to a town near the halfway point of the race.

Hydration deserves its own category, in no small part due to the 100°F+ temperatures we had in Oregon for the first few days of racing.

One of my goals for this race was to improve upon some of the drawbacks of my tour last year, which I feel I succeeded in.

Some hand numbness and hands falling asleep while riding was primarily addressed by getting a bike fit as well as using gel gloves. The addition of aero bars was also extremely helpful, allowing me to give my hands a break while riding. I had my bike fit done by Cronometro in Madison, WI on my GT Grade earlier in 2021. I had saved all the measurements and changes to my phone, and spent hours trying to replicate those measurements to my new bike in the couple weeks before the race. I'm happy to report that after 3,500 miles of biking, I have zero numbness in my fingers and hands.

Another issue from last year was being uncomfortable on the saddle over long distances. The bike fit helped a lot with this, but I took some additional steps to ensure my butt would be more comfortable, or as comfortable as it can be with riding so much every day. Chamois cream and a new saddle were extremely helpful. I also used two different brands of bib shorts to alternate from day to day. Given all these changes, my butt situation was much better than last year, although not perfect.

The last item I intended to address was the mental fatigue from dealing with traffic all day. This one is harder to improve, but I took some steps that ended up being helpful. Despite making me appear much older than I am, a rear-view mirror mounted on my glasses was the best way I addressed my issue with traffic. Being able to see traffic from behind move over before they pass, without needing to turn my head constantly, provided relief on the busier sections of the route. No longer do I have to hope that cars will give me space as they pass me. I can better see what cars are doing and try to take action if needed before they pass. I'm not saying a mirror will make cyclists safer, but for myself, it eased the stress of dealing with traffic.

I also used a Garmin Varia radar taillight which connects to my phone and alerts me if a car is approaching from behind. This was especially helpful in areas with a lower volume of traffic, since I could bike anywhere in the lane of the highway until a car was approaching from behind, at which point I would move to the shoulder until it passed.

Of course, the best way to deal with traffic is to avoid it entirely, and the route for this race did a good job with that given its length. There were many rail trails, especially in the east, where no motor vehicles are allowed. The route also seemed to gravitate towards more backroads, even if that meant a hillier route or riding on gravel that limits speeds to single digits (or both!). Rough gravel with no cars beats a smooth highway with traffic, any day. 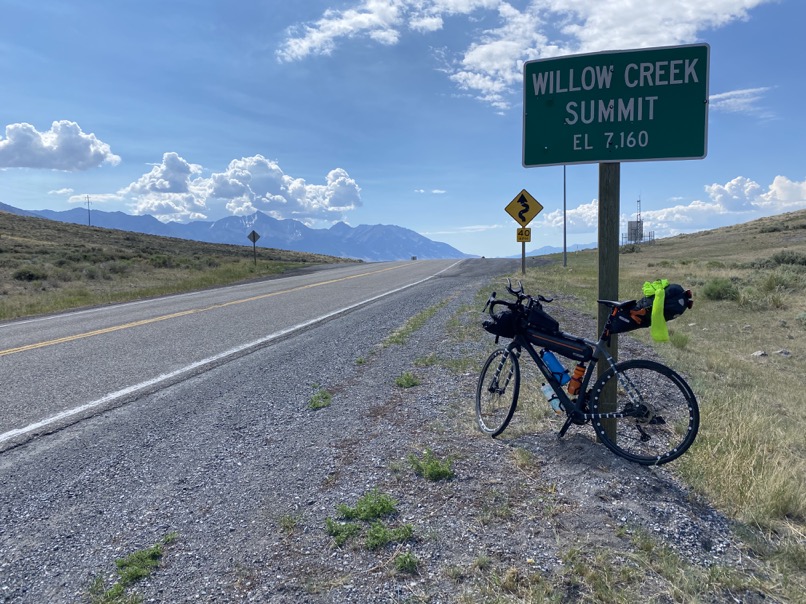 My overall bike setup worked extremely well. Huge thanks to River City Bicycles in Portland, OR for doing a flawless build. I never had to adjust shift cables, brakes, or anything on the ride. The Otso Waheela ended up being a much better bike for this race than I believe my GT Grade would've been. I used every single gear combination on the bike for this route, given the broad mix of flat highways, steep climbs, and rough gravel. My GT Grade's lowest gear was a 36t/32t and I'm very happy I had easier gears than that on the Waheela. My old bike also wouldn't comfortably fit tires wider than 32c, so I'm happy that I was able to run wider tires on the Waheela.

The slick tire tread worked well, too. I never felt at a loss for traction, even on the wet gravel sections. The additional benefits in rolling resistance on the pavement seemed to outweigh any losses in traction on the dirt.

My hydration setup also worked great. Despite being heavy, the Hydroflask was an effective way to cool off since it could keep ice frozen all day. I would fill it entirely with ice and then fill the rest with water, and replenish it throughout the day with my other water between resupply points. This was especially helpful in the west with longer distance between services and hot Oregon weather. The Oregon heat had the effect of making it hard to eat solid food, so for a couple days, I filled the Hydroflask with 40 oz of chocolate milk to aid in calorie consumption.

The neck buff and arm sleeves were helpful for sun protection in addition to keeping me cool. I would frequently soak them in water when I had the opportunity. It also allowed me to use less sunscreen and spend less time applying sunscreen.

Fortunately there isn't much to report in this section. I did have some issues with flat tires though, to the point of using all my spare tubes and almost all my patches. Most of the flats occurred in Nebraska due to thorns that were hard to spot while riding. My tubeless setup wasn't able to seal any of the punctures I got, making me conclude that it performed just as well as when I had to resort to tubes.

What To Do Differently

Continuing on my issues with punctures, I think one way to improve this would be to run wider tires with lower pressures. I've found that tubeless works better with lower pressures in its ability to seal punctures. I think that using a 38c or 40c tire instead of the 35c I used would've helped with this. A different sealant choice would be worth trying as well.

If I were to do a race like this again, I would need to figure out a faster way to charge all my electronics. A wall charger with more USB ports would help with charging more things simultaneously. I would sometimes wake up halfway through my sleep to swap which electronics were on the charger. A few racers were using dynamo hubs to keep things charged while moving, and I think this would've been a good option had I been spending more time on the bike. It was a challenge to keep everything charged.

My phone worked well for navigation but when it rained, it was mostly unusable with water on the screen. I would use my Apple Watch in these situations, but I think a better option would be a dedicated bike computer.

I likely could've mailed more gear home as I traveled eastward, such as my sleeping bag. It did come in handy though when I camped in Stanley, ID and it got down to 42°F, which felt extra cold after being in 100°F+ temperatures the day before in Oregon.

Finally, no need for a razor. I ended up using it a couple times, if only to justify it to myself for carrying it.

I'm overall very happy with my choice of bike and gear, which I attribute partly to luck and partly to intentional preparations. I definitely didn't have the lightest setup among the other racers and would like to lighten the load in the future, but I ended up using every piece of gear I brought and didn't feel the weight was ever a significant drawback.