This post is part of a series summarizing my experience with Bike Nonstop US, a 3,500 mile, mixed terrain race across the United States. Take a look at this page for all posts related to Bike Nonstop 2021.

For more information on the race itself, take a look at my introduction post.

I was looking forward to Iowa since almost all of it was going to be on the Wabash Trace Nature Trail, and unlike the Cowboy Trail, I was expecting this rail trail to be in better condition. Unfortunately, the storms from the last couple days had a different idea. A racer shortly in front of Andrew and I reported on social media that the trail surface was saturated and slow. Along with dozens of trees that fell down across the trail, I knew this wouldn't be as fast as riding tailwinds on highways in Wyoming. As was the case with the Cowboy Trail though, a slow trail with no vehicles is still better than a fast highway with traffic.

As we started on the trail, we immediately came across a volunteer with a chainsaw removing some downed trees. This got my hopes up, thinking there would be more of the same people down the trail as if they were clearing the way for us, but this ended up being the only person I saw doing trail maintenance that day. 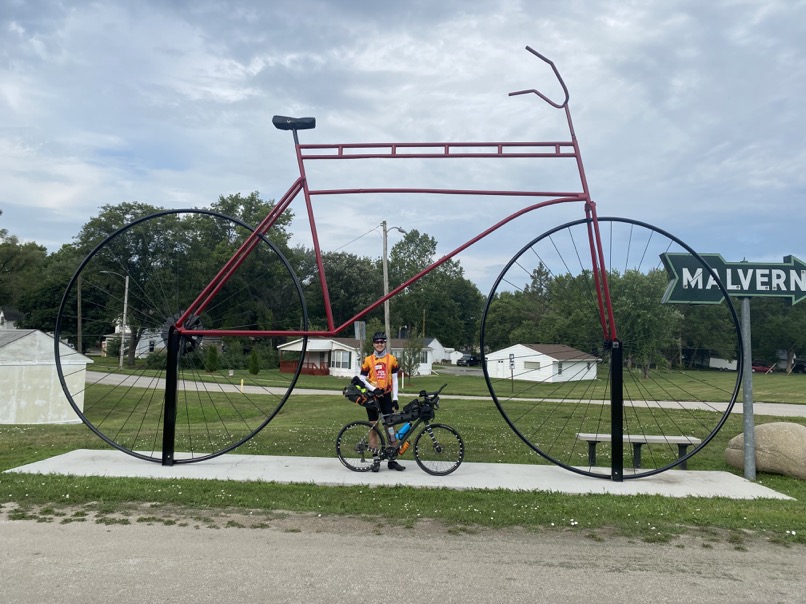 The reports on social media were right. Slow, sticky trail surface with tons of dismounting to get over, under, and through downed trees. On a good day, this trail would be perfect. It had a great tree canopy with abundant services and cycling infrastructure. We had to detour around one section due to reports of a bridge that was ruined by the storms.

The southern terminus of the trail just ended, it felt like I was at the end of someone's driveway. I heard that Missouri was hilly, and it was almost comical how immediately the hills started at the state line.

The day that started with a flat rail trail turned into endless rolling hills of pavement and gravel roads. Except for the Katy Trail, I hadn't been looking forward to Missouri due to the blind hills and roads with no shoulders. Fortunately for the middle of the day, traffic was relatively light, and drivers were kind enough not to pass unless it was safe. 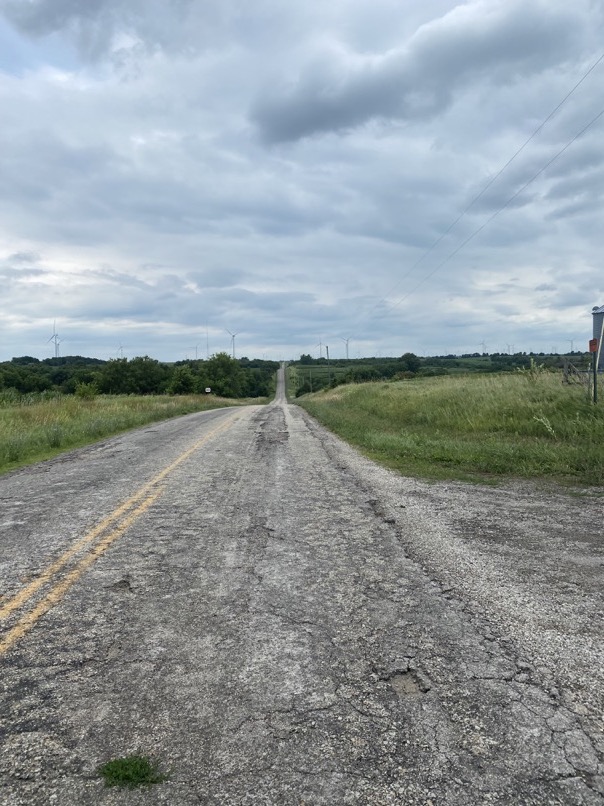 The hills were intense, steep, and endless. We ended the day in Maryville, the last all-services town for the next 85 miles.

The next day started a little after 3:00 AM. This was the hilliest day since riding in the west. Up, down, up, down. I don't remember much flat. Although the average speed on days like this is lower, I enjoy this kind of riding. Many opportunities to stand and move around. 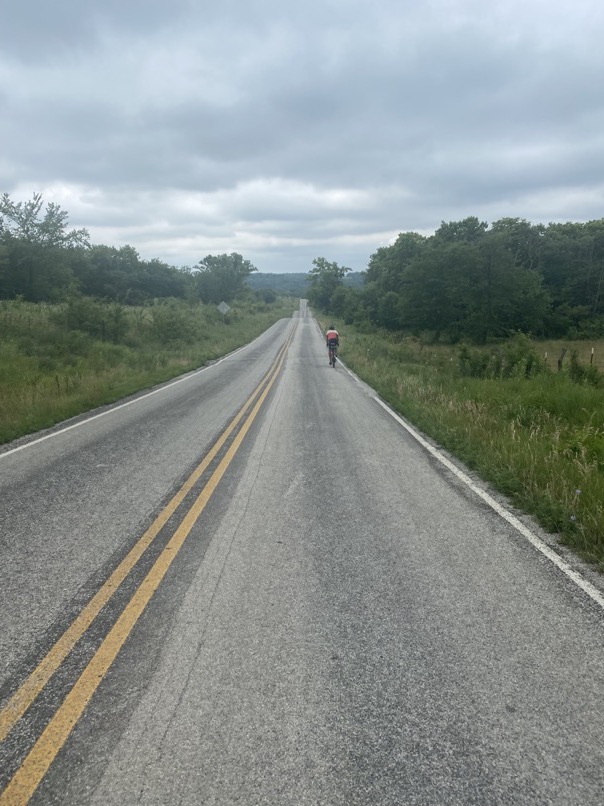 We also had a slight tailwind, and the cloud cover made it feel like room temperature. Ideal weather! Unlike Nebraska and Iowa however, there were very few services. We crossed through some small towns that felt like ghost towns. Businesses marked as open on Google Maps were seemingly abandoned.

A full day of hills brought us to Lexington with the cheapest motel of the trip yet. It actually ended up being one of my favorites. The owner was friendly, and everything was clean. What more can I ask for?

I remember taking a nap in the early evening after showering. One thing I learned on an adventure like this is that sleeping is easy as long as you have time for it. I fell asleep so quickly and slept deeper than I ever have on this trip.

With another early start the next day, we were excited to start the next section of rail trail on the route. The Rock Island Spur and Katy Trail connected together to form a long stretch of trail that would take us all the way to the Mississippi River.

We started a little after 3:00 AM again, resuming the rolling hills. I was surprised by the amount of traffic at this time, the most I'd seen in Missouri so far. I believe it was early morning commuters driving to the main highway to drive into Kansas City. It was foggy too, so I turned on two taillights and stayed quiet so that we could hear cars coming.

Eventually, the terrain flattened out and we joined the Rock Island Spur. I was so happy to get off the road. Unfortunately the trail surface reminded me of the Wabash Trace. Sticky and slow, but no downed trees.

After joining the Katy Trail, the surface improved and our speed picked up. We were expecting some detours later in the day though due to flooding. The race director had sent the detour route, describing it as a "lesson in Missouri Hill country." We left the flat, shaded comfort of the Katy Trail and brushed off our steep gravel road skills, biking through rural neighborhoods in the hot exposed sun.

It was at this point that it struck me how ridiculous (in a good way) this route was as a way to get across the country. We were biking these slow, steep gravel roads, not just for some daily exercise, but to travel across the country. Imagine how insane the road closures would have to be for vehicles to be detoured on to these roads. This thought stuck with me until D.C. Whenever I was on a ridiculous road, path, trail, I remembered that this is the way I'm traveling across the country, and the absurdity of the situation made me feel better.

We resumed the Katy Trail and rode into the evening, doing one of the longest days we've done so far. I realized how much farther I can ride when I'm away from cars. I can just zone out and relax. 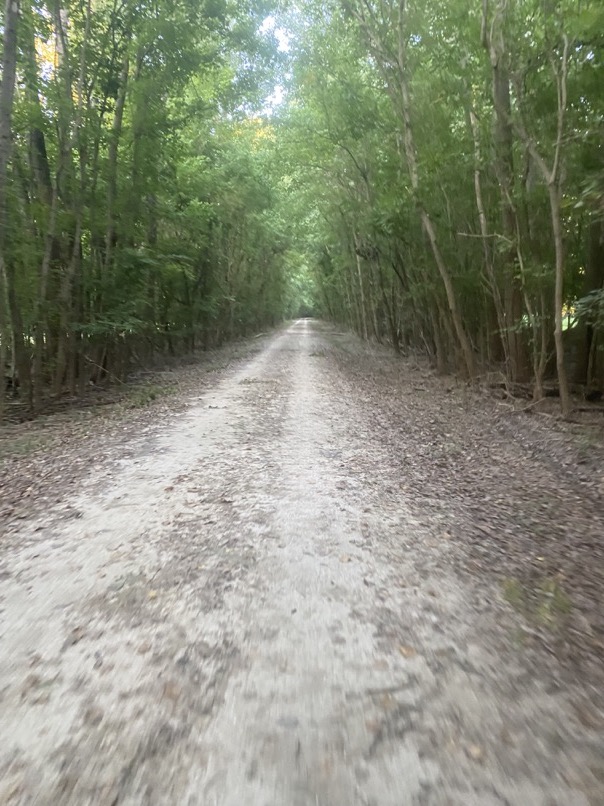 We decided to stay in Jefferson City for the night, a short spur away from the route and across the Missouri River.

It was a longer day, so we started a little later the next day. I eventually made it to the eastern terminus of the Katy Trail, and then over the river into Illinois. The Katy Trail was one of my favorite parts of the trip so far. A well maintained rail trail with ample small towns and services.

The western side of Illinois had nice paths and bike infrastructure, including a rail trail. Unfortunately, we were also on some busy highways with a small shoulder.

The highlight of Illinois was a dot watcher driving out to see Andrew and I, and cheering while wearing a rainbow wig on the side of the road. Her name was Judy and she lived in Springfield, IL, and has driven hundreds of miles to see every single Bike Nonstop Racer so far. Judy is the mother of Rebecca Rusch, who is a celebrity in the ultra-endurance world.

I had learned of Rebecca earlier that year and she was one of my motivators for doing this trip. Rebecca's movie Blood Road was very inspirational to me. It was a great story of her father's experience and plane crash in the Vietnam War, told through an intense biking challenge while detailing the history of the war. I learned more than I ever had about the Vietnam War watching Blood Road, a war my own father was also serving in with the Air Force around the same time.

Thank you Judy for the mental boost that day, and Rebecca for the inspiration! 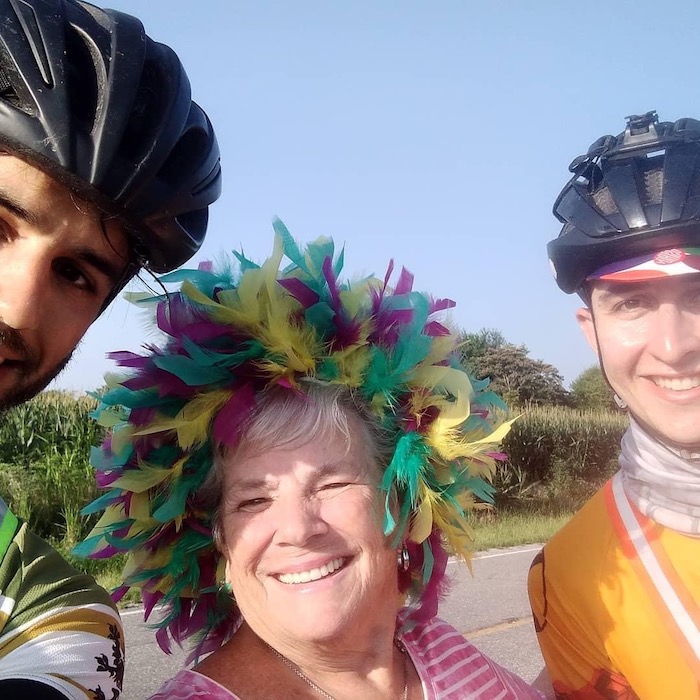 Another highlight of Illinois was an exchange with two guys in a rural farming community. It was a hot day, and as we were biking through town, I spotted a vending machine next to a building. I had plenty of water, but a cold soda sounded good since there weren't many services in the area.

As I was getting a couple of sodas, a pickup truck drove by while the passenger yelled "Where you guys from!?" I didn't think much of it, but sure enough, the truck came back for a longer talk. I don't quite remember what all we talked about, but it was clearly a drunk guy being driven around by his son.

At one point, I started putting on sunscreen just to make some valuable use of the time, and he commented on my "beauty cream." The exchange eventually ended with the guy throwing a $20 bill out the window and telling us to buy a chicken dinner down the road. Andrew picked up the $20 and we agreed to just leave it at a gas station down the road, hopefully financing someone else's chicken dinner. 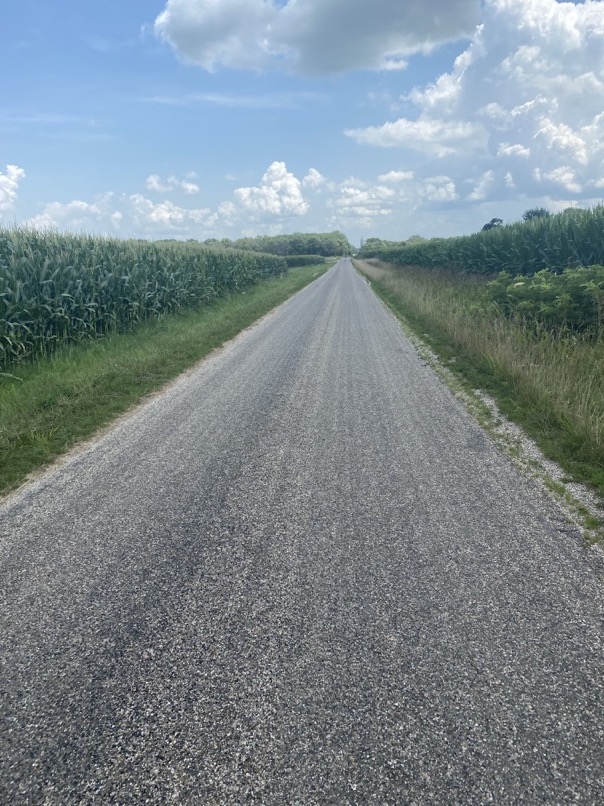 Overall, Illinois was a collection of flat farm roads, highways, and a little cycling infrastructure on the Western side of the state.

I had been pretty lucky with the weather since Nebraska, but Indiana would break that streak. Andrew and I were still riding together at this point. Our first day in Indiana was filled with pouring rain and thunderstorms. My feet were wet all day, and I was worried they'd start to blister.

Indiana was definitely more hilly than Illinois, but with less cycling infrastructure. It had many beautiful parts though, like biking on gravel roads through quiet forested areas. The traffic was pretty bad sometimes, especially as we got closer to Ohio. 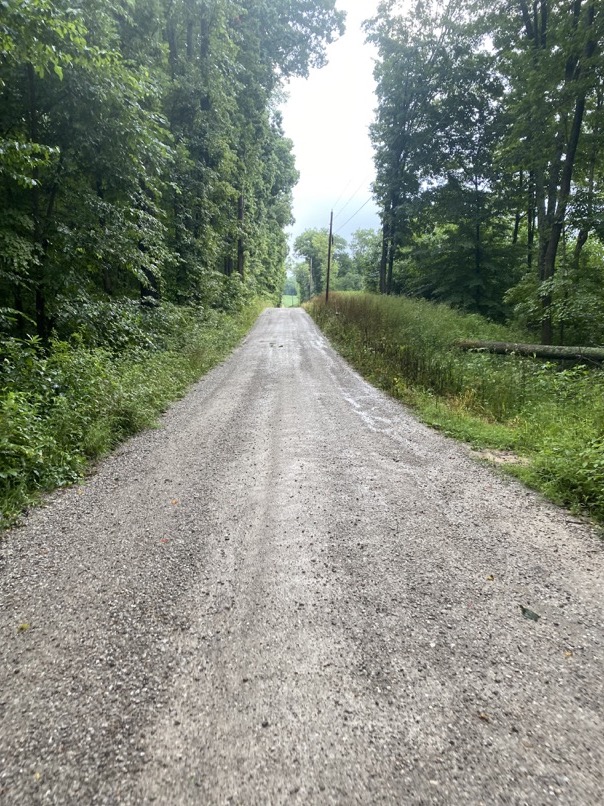 Indiana had another memorable dot watcher, Matthew, who drove out and met Andrew and I at a gas station. Matthew had been very active on the Facebook group used by people to watch the race online, and like Judy, he was trying to see every racer come through and even inviting them to come sleep on his porch. We both work in IT, so it made for some good conversation to distract me from an otherwise wet day with more traffic than desired. 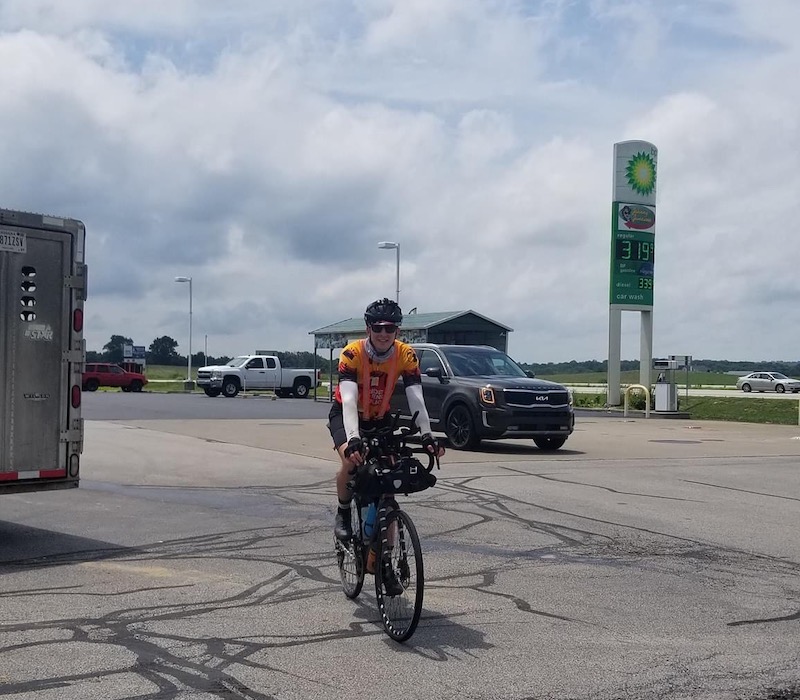 At the end of our last full day in Indiana, Andrew noticed a crack in his rear wheel, which was causing his wheel to be out of true and possibly too dangerous to ride much farther. He consulted some friends and looked around for bike shops, and we were likely going to split up sometime in the next day so that he could find a new wheel.

The next morning, we started early and almost immediately ran into flooding. We could see the end of the flooding and it didn't look too deep, so we took off our shoes and socks and walked through the water. I spent so much time drying my shoes and socks with the hotel hair dryer, and I didn't want to start the day with wet feet again.

We put our shoes and socks back on, biked over a short rise and back into a valley where the road was flooded again, but this time we couldn't see where the flooding ended, and the current was swift. We decided to turn around and repeat the same shoe-sock process to backtrack over the shorter flood we had just crossed.

Since the roads were in a grid out there, it was easy to find a detour but it likely added 45 minutes to the day. Luckily, we didn't run into any more floods and the weather improved as we got closer to Ohio.