Who turned on the hair dryer? - Bike Nonstop US Part 1: Oregon

This is the first post of several parts summarizing my experience with Bike Nonstop US, a 3,500 mile, mixed terrain race across the United States. Unlike my daily journal of last year's tour, Bike Nonstop summaries will be separated by region, with Oregon deserving of its own post with how eventful it was.

For more information on the race itself, take a look at my introduction post.

Tensions were high as weather forecasts started to accurately predict the weather I would experience riding through Oregon. Record breaking temperatures were anticipated, ramping up shortly before the race left Portland the morning of July 27th, 2021. This heat wave was so intense, unusual, and unfortunately fatal for many in the western United States that it has a Wikipedia page.

Trying to avoid dehydration, I made some last minute gear changes, swapping my 48 oz Nalgene for a 40 oz insulated Hydroflask that could keep ice cold all day. Additionally, I added a 70 oz Platypus soft bottle. 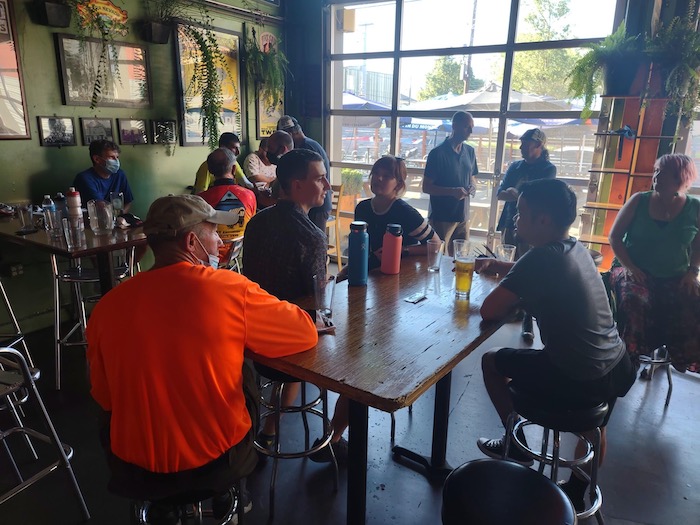 The evening before the start, racers and the race director met at a bar in Portland to distribute GPS trackers and agree on a start time. It was 108°F outside (an all-time record for Portland) and couldn't have been more than 15 degrees cooler inside the bar. Being a newer and lesser known race, there were only 11 racers but the camaraderie was high from the beginning. This will be a recurring theme throughout my posts: The people. People were one of the main highlights of this experience, including the other racers, dot watchers (people who watch our GPS tracks), and total strangers.

The race was originally scheduled to depart at 6:00 the next morning but we all agreed to move it to 5:00 AM instead. In retrospect, this likely didn't make much of a difference, and I would soon learn that it was necessary to start each day of riding much earlier.

My original goal was to make it to Fossil, OR on day one, which would've been about 175 miles with a good chunk of climbing. With the weather forecast, I adjusted expectations and aimed for Maupin, OR instead, a little over 110 miles from the start. 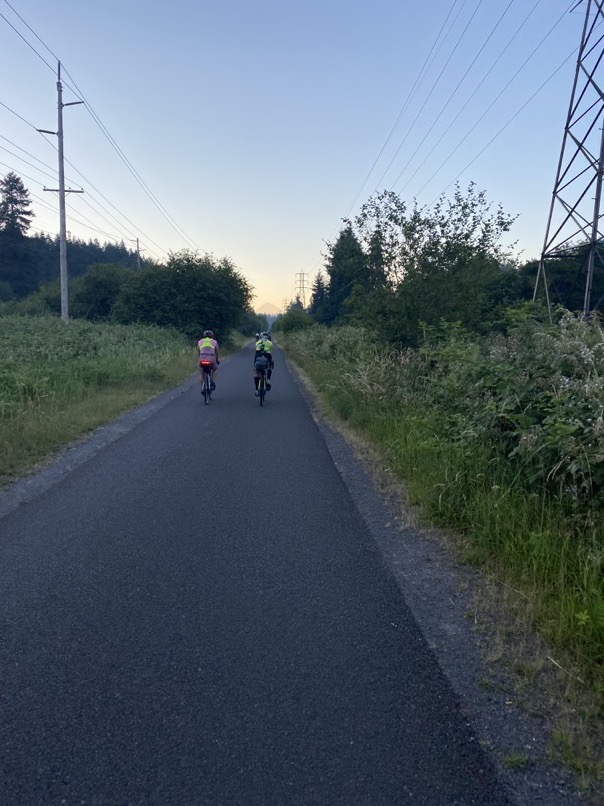 The route for the first installment of this race in 2019 had racers leave Portland and join the Cascading Rivers Scenic Bikeway. Wildfires in 2020 have left most of that route closed ever since, requiring a route change to stay closer to Mount Hood.

I enjoyed climbing Still Creek Road, a beautiful single-lane forest road close to Mount Hood, with abundant shade and sounds of running water. Later on highway 216, I passed signs for a fire that had broken out a week before. Fortunately, fire crews quickly had the fire under control and a reroute wasn't needed. 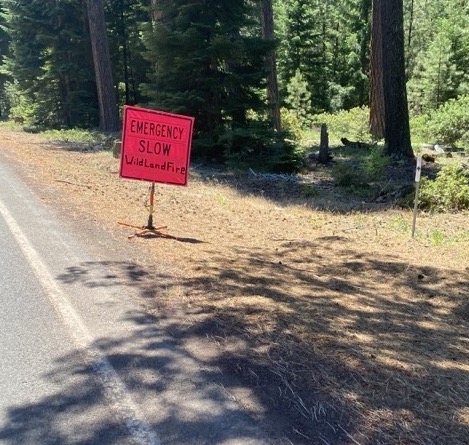 Shaded, high-elevation alpine terrain soon descended into the exposed, high-desert landscape of central Oregon. The sudden increase in temperature felt like a giant hair dryer, a metaphor frequently used by other racers. 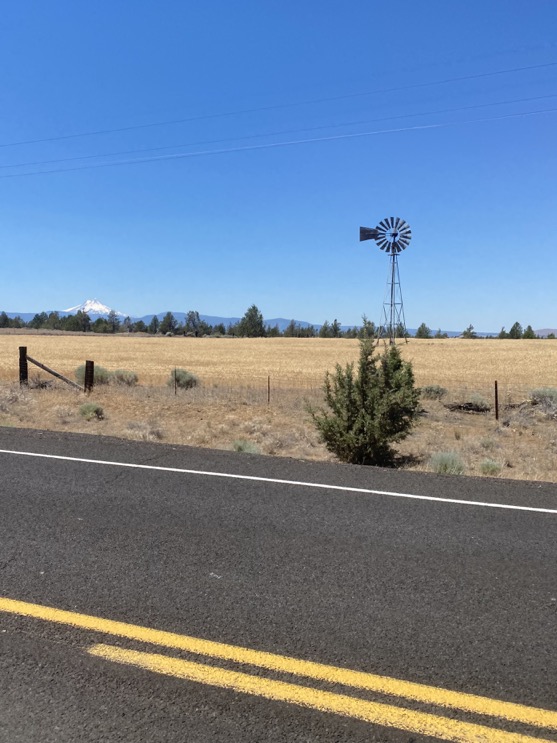 Descending further into Maupin, where the high was 115°F that day, I resupplied before arriving at a lodge that another racer had offered to share with anyone who could make it. It was the mid-afternoon and I was content with staying in Maupin until it cooled down. Only two other racers continued beyond Maupin that afternoon with one of them turning around due to even hotter temperatures reported on the big climb appropriately named Bakeoven Road.

What better way to pass the time than to meet with my Dad to swim in the Deschutes River and eat dinner together at a local restaurant. He had ridden his motorcycle from Corvallis, OR that day and was spending the night in a nearby hotel. Although I felt physically good at this point, during dinner I was starting to realize the effects of heat that I never have before. My appetite wasn't all there. It was taking me a little longer to eat food than usual and I ate less than I thought I needed. Another effect of the heat was on my sleep. It was hard to go to sleep, which was frustrating since I was planning to leave at 2:00 AM with another racer in order to get to Mitchell, OR before it was too late in the day.

The ride from Maupin to Fossil the next morning was stunning. Big views, big climbs, minimal traffic, and hot but manageable temperatures. 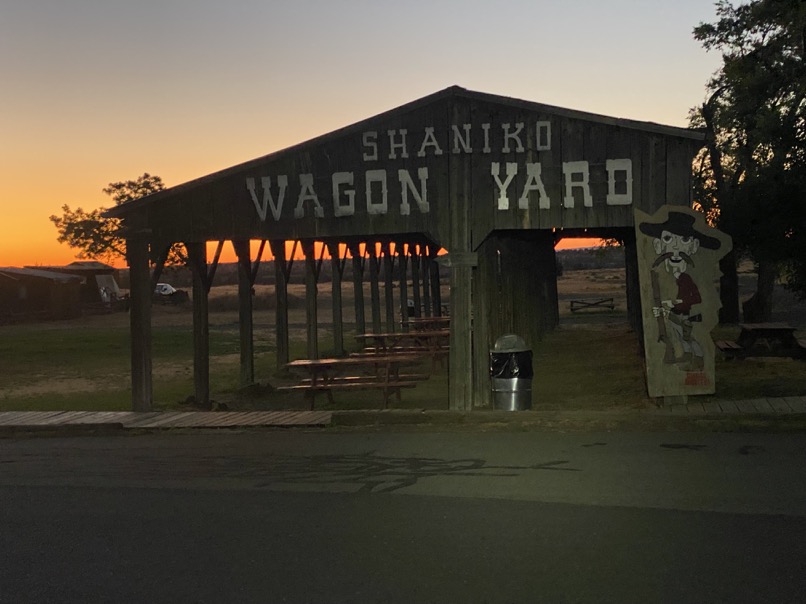 I caught up to several other racers in Fossil, who had left Maupin in the evening of the previous day. After a critical resupply in Fossil, five of us left around the same time and headed towards Mitchell to experience what was the most challenging section of the entire race from my point of view. It was still the morning but already hot. 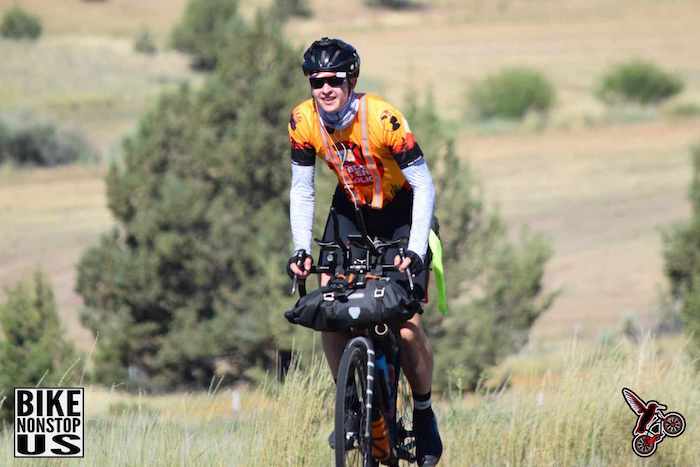 After another mountain pass, I descended into the rural community of Twickenham along the John Day River. I was reminded of the hair dryer effect of yesterday's descent into Maupin, but this was much worse, and much earlier in the day. I caught up with another racer who was enjoying the shade of a restroom next to a boat launch. Some rafters had left a pile of unneeded ice next to the river, so I loaded some into my neck buff and arm sleeves. The river seemed a little questionable to filter, and I felt good about the remaining water I had to get me to Mitchell.

A couple other racers caught up to us with one of them reporting a spigot close to the road a half mile back. I went back to top off my bottles and drink a lot directly from the spigot. It felt good knowing I was carrying as much water as I could, with the temperature still increasing.

Four of us continued towards Mitchell together where the road changed to gravel and ascended on one of the steeper sections of the day in the hot, exposed sun. Being next to the Painted Hills, I was really looking forward to the section of this route, but I don't think I remember seeing a single painted hill that day. It was just too hot. My mind was focused on moving forward fast enough but being careful to take breaks often.

A ranch worker pulled over and gave us some cold water and Powerades. We took frequent breaks in the shade on the side of the road, about every 10 minutes, since the road itself was entirely exposed. Nearby farm sprinklers provided brief but needed solace as the heat was just destroying us. 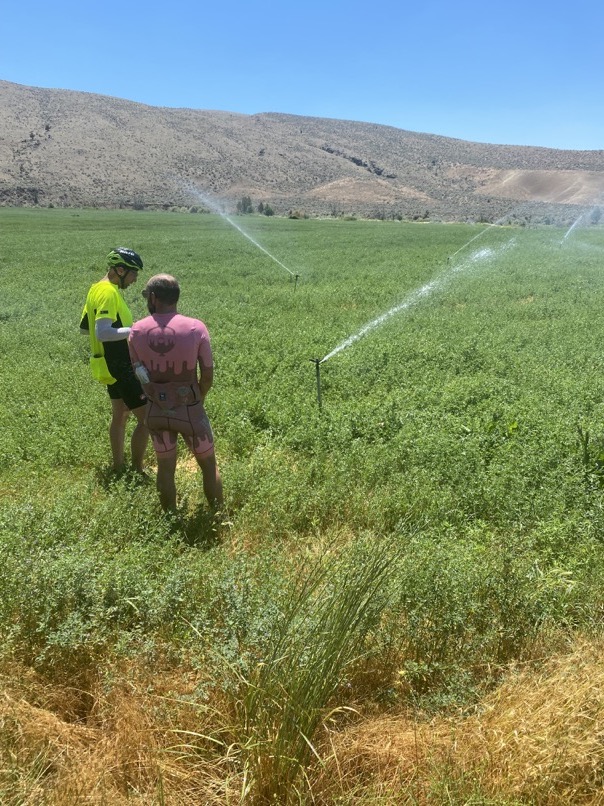 We eventually came across a person and his dog who had a small but welcoming campground setup on the side of the road. He offered us water. I still had plenty, but it was almost too hot to drink with the exception of the ice water in the Hydroflask that I was rationing. He said the temperature outside was 115°F in the shade and 125°F in the sun.

Most of my food was liquified. Another racer's sunglasses had melted.

We eventually joined the highway and climbed a few miles to the Spoke'n Hostel in Mitchell, a donation-based hostel for travelling cyclists. In the distance, I could see people out in the road with cowbells, cheering for us as we arrived at the hostel. This is a tradition of the hostel, with workers and guests tracking the GPS locations of racers as they climb up the highway. Cold glasses of water and popsicles were at the ready.

Arriving first among our group of four, I took some pictures of others arriving. I was likely still running on adrenaline at this point, since a better choice would've been to go inside and recover in the air conditioned basement. 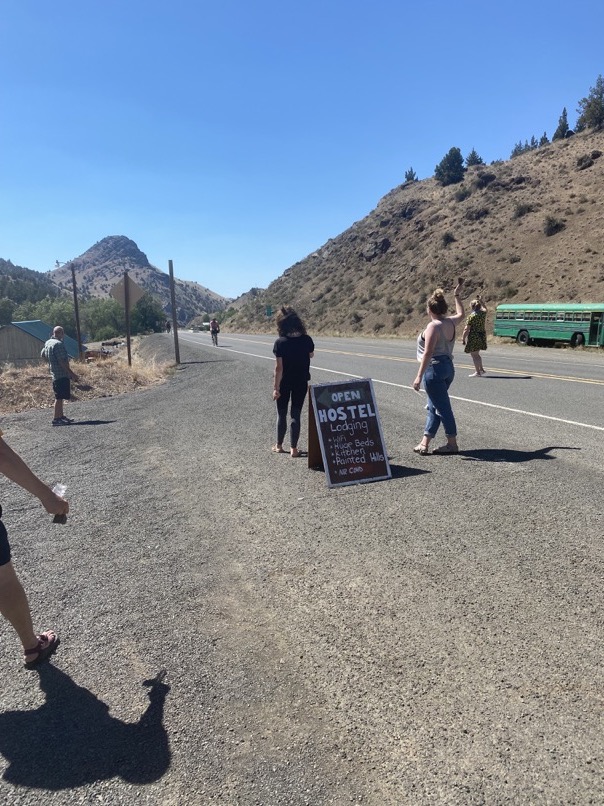 After showering and heading to the basement, my body caught up with me. I had never felt so destroyed in this way. My appetite was completely gone. I sipped on some chocolate milk to get some calories down. That day was not sustainable and just objectively unhealthy.

The Spoke'n Hostel could not have been a better way to end the dangerously hot day. The hospitality and kindness of the workers there was nothing short of incredible. Laundry, beds, shower, plenty of food, bike tools, and everything a travelling cyclist could ever want. I encourage readers to check out the Spoke'n Hostel's website to learn more and make a donation if you are able to.

I left the next morning around 2:00 AM with a plan to make it to Prairie City, OR, a little over 80 miles away. With a Hydroflask full of ice and chocolate milk, I left the hostel and made it to Prairie City a little after 10:00 AM where it was already in the low 90s. It was a much needed short and uneventful day, despite still feeling destroyed and running on little sleep. Another burst of hospitality came from the Hotel Prairie in Prairie City, who let me check in early and offered rags and a hose to clean my bike.

I tried to rest during the day but was only able to get in a couple hours of sleep. As night fell, I was still awake and noticed another racer on Trackleaders leaving Prairie City. Trackleaders is the website used to show the GPS locations of all the racers. I decided to postpone sleep, pack up, and hit the road around 11:00 PM.

Riding Through the Night

Despite running on little sleep, relaxing in the AC made me feel much better. Riding through the night was a lot of fun, especially the forested section east of Prairie City with a couple mountain passes. The silence and solitude was relaxing. I only saw a couple cars before sunrise the next day. 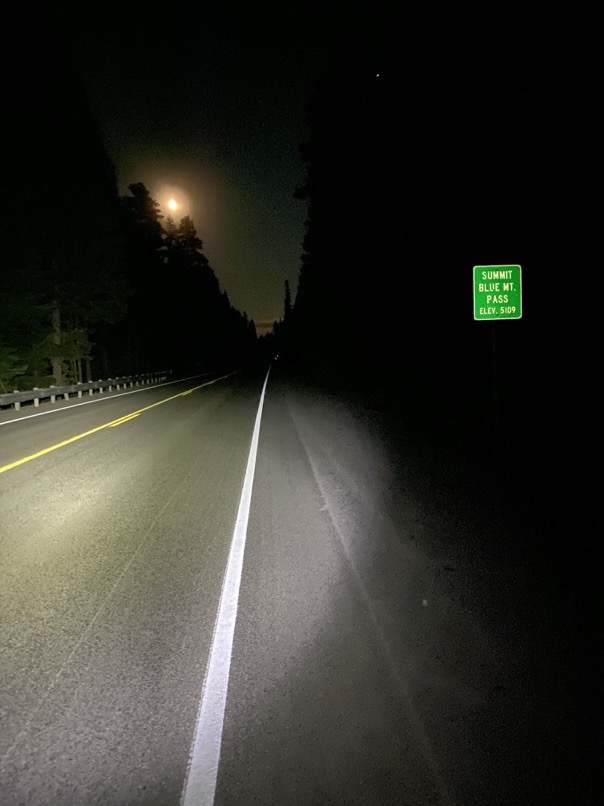 I eventually caught up with that other racer, Andrew, who was taking a nap on the side of the road. It turns out we stayed at the same hotel, both feeling destroyed from the previous day to Mitchell.

As I continued, I passed a pickup truck parked on the side of the road with its engine and lights on.

Two guys were walking around the truck, and one yelled out to me, "Do you chew any dip? Do you have any Copenhagen?"

I usually like to pull over and say hi, but it was 3:00 AM in the middle of nowhere, eastern Oregon. 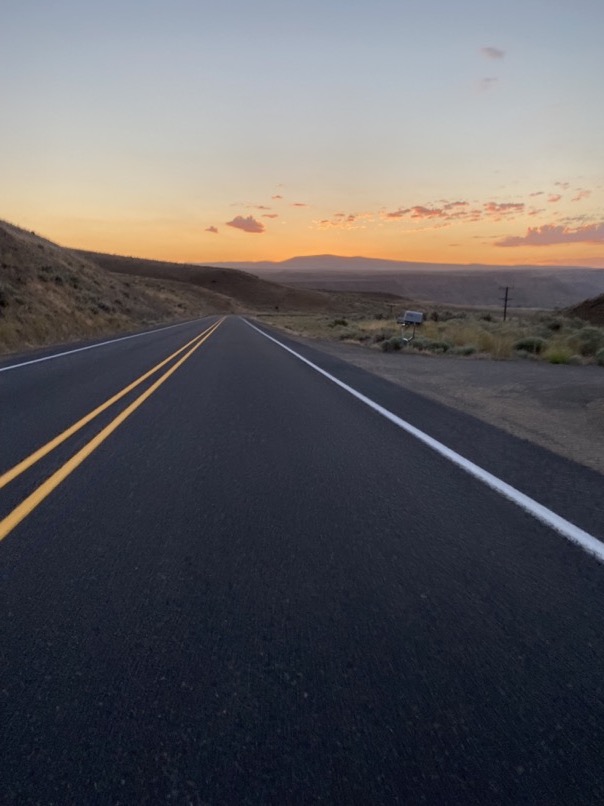 Back when I was researching the route before the race, I found a racer's blog from 2019 who mentioned dogs chasing him in the small town of Brogan in eastern Oregon. Even though Brogan didn't have any notable services, I added it to my map to note the possibility of the dogs. Sure enough, arriving into Brogan, two dogs were at the end of a driveway on the left side of the road, awaiting my arrival. They started to come towards me, but I noticed a car approaching from behind and slowed down to hide behind it as I passed the dogs. Nice try, dogs.

I stopped for the day in Ontario, OR, right along the Idaho border. Leaving the night before ended up being a wise choice. It was, unsurprisingly, another blisteringly hot day with a high of 107°F. 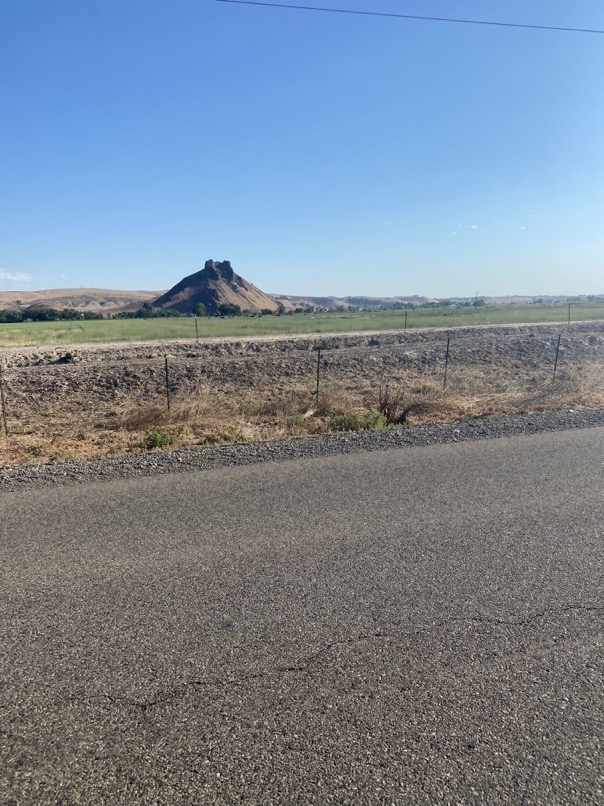 Fortunately, I was feeling much better and was getting my appetite back. I also took a nap in the hotel that afternoon and got the longest, deepest sleep since before the race started.

Andrew was also staying in Ontario, and we decided to leave together at 10:30 PM that night, immediately crossing the Snake River and into Idaho. Goodbye, Oregon. Be cooler next time.