Trying to avoid the thunderstorms that were approaching, I left early in the morning. The goal was to make it to the next town over, Belfield, to wait out the storm. I had a tailwind pushing me out of Dickinson and I saw some nasty looking clouds approaching. The weather radar on my phone and showed the storm heading towards me. I pedaled a little bit harder, trying to make it to Belfield. I saw lightning in the distance. The tailwind started to turn into a headwind. I heard thunder. 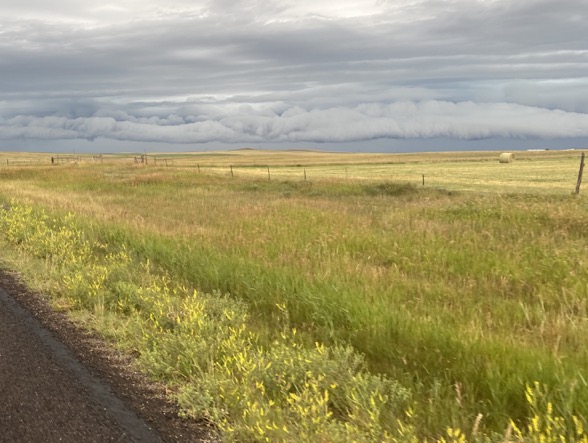 It was at this point I knew I couldn’t make it to Belfield and had to find shelter. The rolling hills in this area combined with minimal trees meant I was the tallest thing around at some times. I had passed a few large metal buildings a few minutes ago and the rain had already started. More thunder, louder this time. I turned around and headed towards the buildings. There was a sign out front that said “Truckers” and then had a phone number below it. It was a gravel parking lot with some beat down cars. I went over to one of the buildings and approached the door. It was unlocked, so I went inside. All the lights were off, and there were several large trucks, and one of them was a crane truck. I heard the rain and thunder pick up outside and was relieved I found shelter.

I heard a truck pull up outside and turn off the engine. Before I could think about going outside, the person came in the same door and turned on the lights and saw me. He seemed a little startled, but he wasn’t happy to see me there. I apologized and said I was waiting out the storm. He opened one of the garage doors and backed his truck inside. He said I should probably go, and that his boss won’t like it that I’m here. I stuck around for a little longer, unsure if I was being given a few minutes to wait out the rain. The person went back in their truck for a few minutes. He came out again and said I should leave, and said he’s lucky that he saw me because his boss is the one that carries a gun. The rain had died down so I left, never planning to go near that place again.

Today’s route included another jaunt on the interstate. Before I took the on ramp, I pulled over to take off my rain jacket and eat the rest of my Domino’s brownies that I had stuffed in my jersey pocket. This section of interstate was mostly downhill. I saw a couple bike tourers on the other side of the freeway, going east. They didn't notice me waving, focusing on climbing up the interstate on bicycles. I got off the interstate and went through Dakota Cyclery in Medora to get a new chain. They let me borrow their chain measuring tool which told me that it was time to get to replace my chain. I swapped my chain and did a quick test ride to make sure my cassette wasn’t also worn out. They let me use the restroom to wash all the black grease off my hands. They told me about what they use to clean their chains and that my chain shouldn’t be that dirty. I laughed and told them how I usually keep it clean when I’m at home. 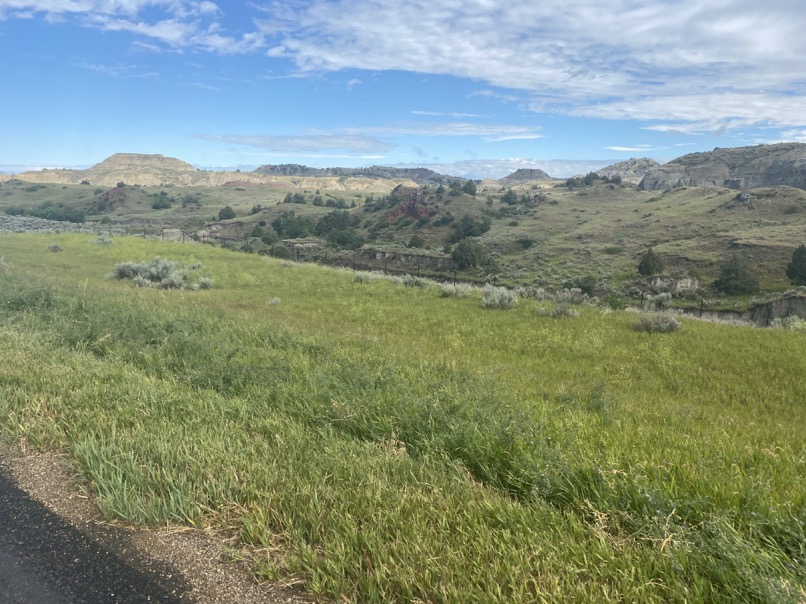 At this point, the sun was out, I had a tailwind, traffic was minimal, and my new chain felt great. The scenery was beautiful, with more prominent hills that necessitated curves in the road. I caught up to Alan who was enjoying a view while sitting in his camp chair and eating cheese and crackers. We said hello and we shared our experiences for the storm that was now behind us. Alan was eating his second breakfast back in Medora while I was likely putting myself in more danger by going in a sketchy warehouse. 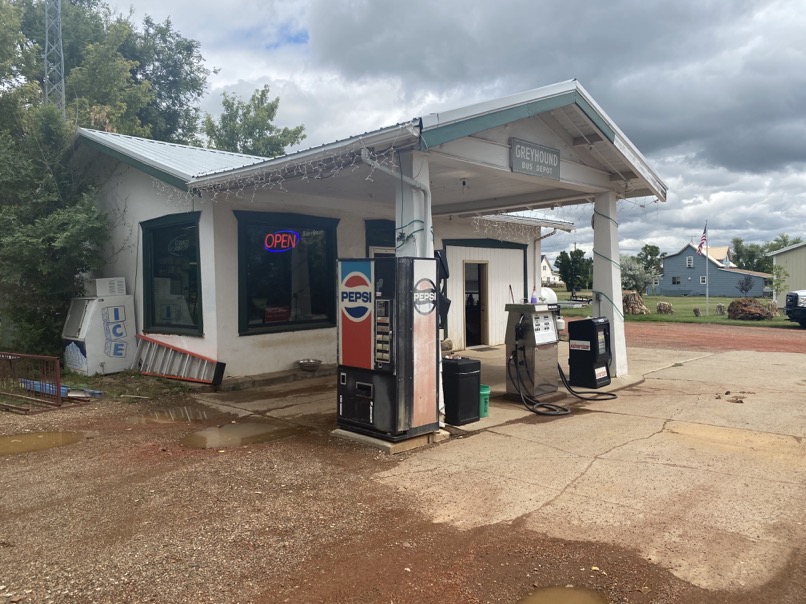 I stopped by a small gas station in Sentinel Butte. The owner was so friendly, asking about my trip and offering to help me find the junk food I was looking for. I got a soda and a candy bar, and ate them on the picnic table outside next to the bike racks, a small but welcomed sign of hospitality after the less friendly hellos I had experienced in the past 24 hours. I caught up to Alan again, who had kept going while I ate candy outside the gas station. It was nice being able to spend the trip with someone but not needing to coordinate all our activities. Every time we split up, I wasn’t sure if we’d see each other again, but we usually found each other somehow.

We rejoined the interstate and crossed the Montana border together. We pulled over and took each others’ pictures with our bikes next to the welcome sign.

Alan said to watch out for small wires from shredded truck tires on the shoulder of the interstate, since they easily puncture bike tires. We continued to Wibaux, Montana. I didn’t get a flat tire but I did avoid running over a hypodermic needle. It was 28 more miles to Glendive but decided to call it a day with the winds starting to increase out of the west.

Alan and I split a campsite at an RV park. We set up camp, showered, and went to the town grocery store together to get breakfast and snacks for tomorrow. He bought a 4 pack of blueberry muffins for us to split. We ate dinner at a restaurant and I got another hamburger. Alan took a picture of it because of how big it was. We headed back to the RV park and said good night before going to our own tents.