Today was the earliest start I had on this trip so far. I was on the road by 5:30am, just as the sun was rising. 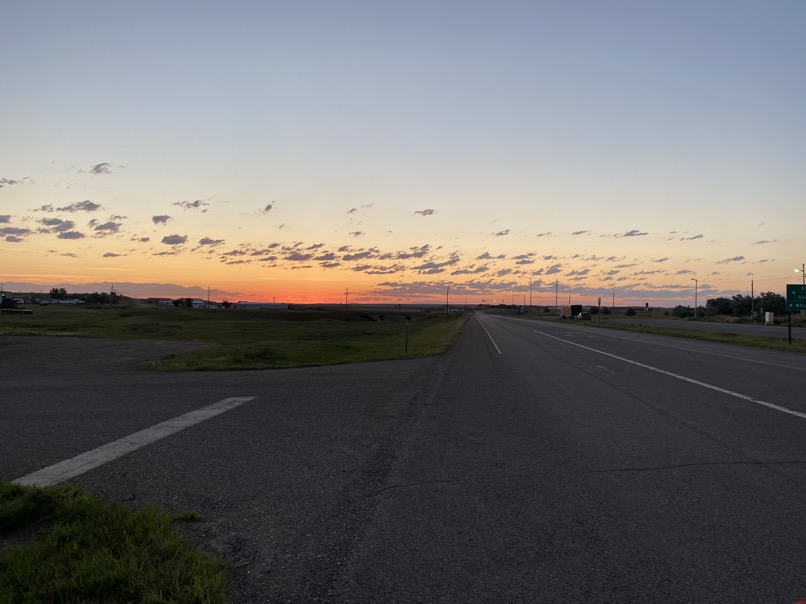 A few of the locals warned us about the stretch of highway 200 between Circle and Jordan, and as I started riding, it became obvious why. The road went through rolling, blind hills and had no shoulder. There were signs that said “Rough Narrow Road.” 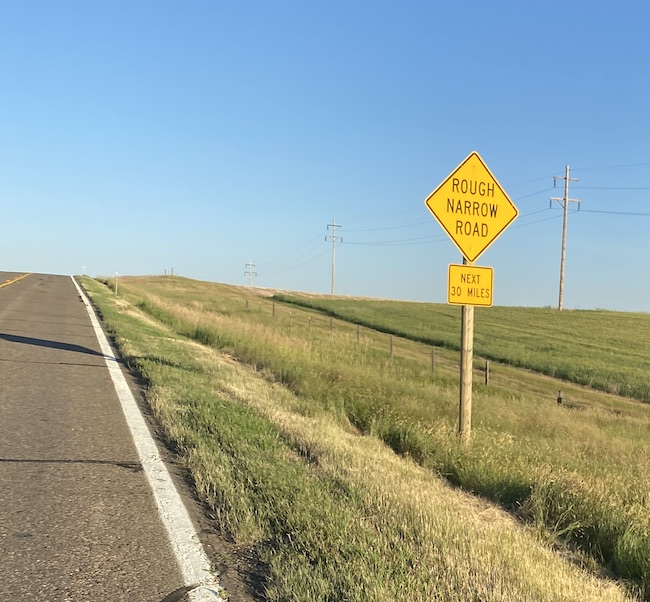 There was a slight tailwind, but I started early to avoid the 102 degree forecast for the day and minimize the traffic I would see. It didn’t take long to catch up to Alan, and I remember the wind started changing direction at this point. I saw him in the distance and then I heard a semi truck approaching. I decided to pull over for a second to get off the road, not expecting the driver to get in the oncoming lane on the ascent of a blind hill. When I caught up to Alan, he asked if that truck had gotten really close to me. I said no and was glad I got off the road, since the trucker wasn’t too friendly to Alan. Alan told me he was amazed how far he could see my flashing headlight in the mirror mounted on his helmet.

We talked for a couple more minutes but decided it didn’t make much sense to ride together today. Riding side by side meant we could talk, but it also meant we had to be more attentive to passing cars. The road today wasn’t safe to ride together. I continued on my way, and stopped at the rest stop that I called the day before. Sure enough, the drinking fountains were on so I refilled and sat at a picnic bench to eat a snack. This was a newer rest stop that really stood out amongst the old, narrow highway in the middle of nowhere in Montana.

I continued on towards jordan, feeling like I was on a conveyor belt going up and down rolling hills past grassland and grazing cattle. I saw two other bike tourers going the other direction on a tandem. We chatted briefly, not having a good place to stop on the shoulderless road. They mentioned they had been biking a week on the Northern Tier route every year.

I stopped at a gas station in Jordan to buy chocolate milk, soda, and some snacks and brought them across the street to eat at a picnic bench. It was really starting to get really hot at this point. I reapplied sunscreen and kept going west. I was aiming to stay at the next town over: Sand Springs, which was a little over 30 miles away. My map listed one stop in that town, which was a convenience store that allowed camping. I had called the number the day before with Alan to confirm they were still accepting campers and so they knew to expect us.

As I was biking out of Jordan, I noticed the abundance of grasshoppers crossing the road. I tried to avoid them, but there were so many that it was impossible to run them over. This was the hottest weather I had biked in during my trip so far, and my tires started collecting gravel off the road and sticking to my tires. The small gravel scraped as it went through my front fender, and then sprayed out the front. At least the road had a shoulder I could bike on.

With six miles left until Sand Springs, a mini van slowed down and drove besides me and the passenger asked if I wanted any fruit. Having eaten mostly pre-wrapped food and hamburgers recently, I accepted their offer and we both pulled over. It was a couple who was driving from Maryland to see their son in Missoula, Montana. They had a flat of peaches and plums in the back of their minivan that they bought from an orchard in Maryland. They gave me one of each, and mentioned they saw a bike tourer earlier in their road trip (not Alan) who had no food on them, so they were kind enough to help them out. I mentioned I had plenty of food on me, but I appreciate the fresh fruit. We said goodbye and I continued biking while eating my peach and my plum. 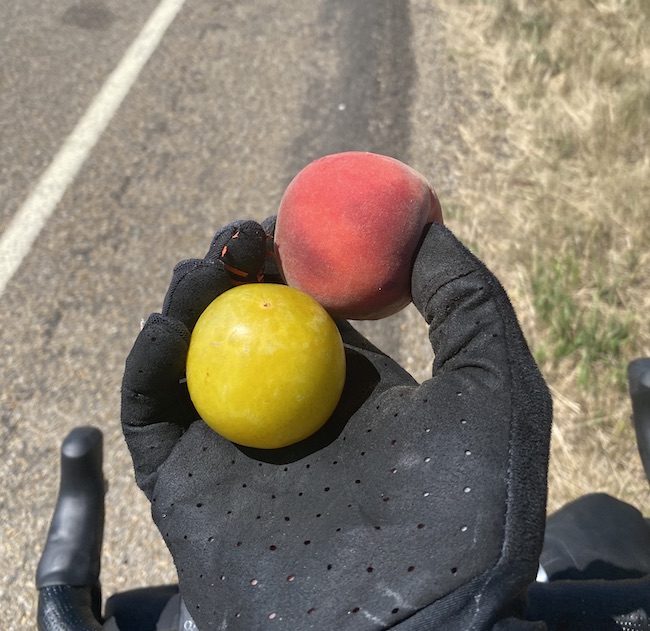 I arrived in Sand Springs, an unincorporated rural hamlet with a population of 9 people. The combination convenience store and gas station was right along the road and was the main feature of the area. I parked my bike on the side of the store, in the shade, and went inside.

One of the owners asked if I was the person who called yesterday and I said yes. They had a shower I could use for $5. The owner gave me a towel and unlocked the bathroom for me. The bathroom had a shower that would normally go in an RV. Small with a low showerhead, but it was stocked with body wash and shampoo. A few cockroaches as well. After I showered, then went inside and ordered a pizza and a milkshake. The tandem cyclists I saw earlier had recommended the milkshakes here. The owner put a frozen pizza in the oven and made me a milkshake. I paid for the shower, milkshake, and pizza and then sat at a table to eat. 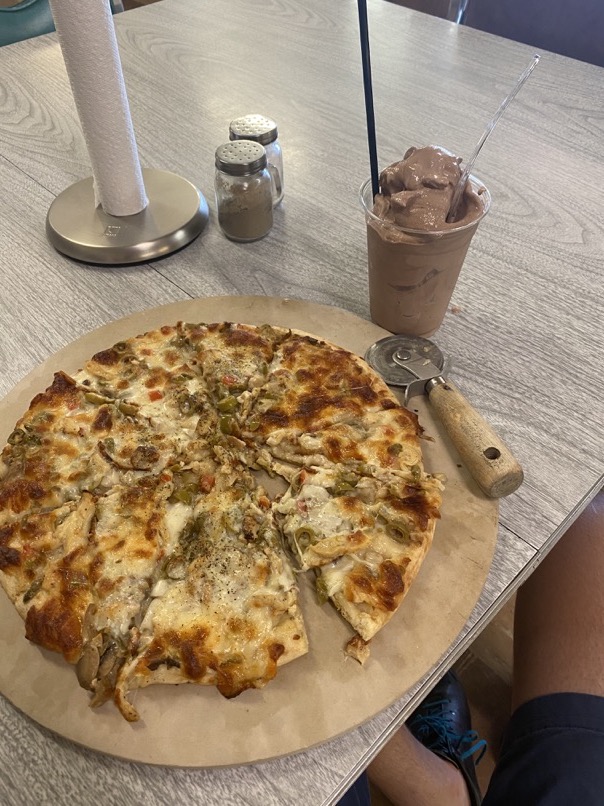 It was amazing that they had wifi, since there was otherwise no cell reception here or anywhere else along my ride today. I was happy staying out of the heat and relaxing inside. I wasn’t expecting Alan to make it this far. Sand Springs was 100 miles from Circle, and when Alan and I planned our routes yesterday, it sounded like he was leaning more towards staying in Jordan given the hot forecast. A couple hours after arriving in Sand Springs, the owner asked if I was with the cyclist that just arrived. It was Alan, who kept riding all the way to Sand Springs in the 100 degree weather! He came inside, sat down, and immediately ordered a strawberry milkshake.

We sat in the chairs next to the register and chatted with the owner of the store. A small UPS truck pulled up to get gas and stopped inside to join the conversation. It was so much fun to talk to everyone there. Alan asked the UPS driver about his route, having to deliver packages to rural ranches on gravel roads. The UPS driver told us the road ahead had more grasshoppers than we saw today.

Alan went back outside to gather some items from his bike. When he came back inside, he was wondering if he set his phone down anywhere. He couldn’t find it. When one of the owners heard about this, she started helping Alan find it by looking around in the store and asking Alan if she could search around his bike. Alan eventually gave up, but the owner refused to think the phone was lost. She called gas stations in the previous towns, called the local sheriff, and asked eastbound travelers getting gas to keep an eye out for the missing phone. I volunteered to be the point of contact, giving my phone number to the local sheriff and a couple fueling their motorcycle. They were riding around the country, on their way back home to Wisconsin.

Alan went to take a shower and I went back to the table to enjoy the air conditioning inside. We then set up our tents. I opted to stay closer to the store to enjoy the wifi. Alan setup camp farther behind the store next to a large metal drum. The owners (husband and wife) advised him against that, since it was filled with trash that they burn sometimes. In the evening, Alan ordered a pizza, and I bought a frozen sandwich that they heated up in the microwave, along with another milkshake. Before the store closed, we walked around to get breakfast and snacks for the next day, since the store wouldn’t open until we were on the road. No breakfast sandwiches or muffins here. We bought Poptarts and trail mix to have for breakfast in the morning. I remember buying so much stuff that I added up the total for them since they didn’t have a barcode scanner. They were appreciative, and I took my $45 of junk food outside so they could close up shop.

It was still hot out, but the owners were nice enough to set up a fan and some chairs outside the store so we didn’t have to hang out in our tents. Their house was next door. I enjoyed talking to Alan for a while, and then Facetimed Abbey and introduced her to Alan. Alan said good night and went to his tent, and I talked with Abbey while playing with one of the three kittens that were walking around. One of the owners of the store said a stranger dropped them off a couple weeks ago.

I headed into my tent for the night. One of the kittens still wanted to play, occasionally pouncing on the side of my tent. At this point in my trip, I was halfway done. 1200 miles to go.