Another early start: On the road by 6:00am. I was excited to cross into Idaho today. The highway outside of Lolo only had a few cars. I made it to the top of Lolo Pass after the gradual ascent with fresh, smooth pavement, and stopped at the visitor center to refill water bottles. 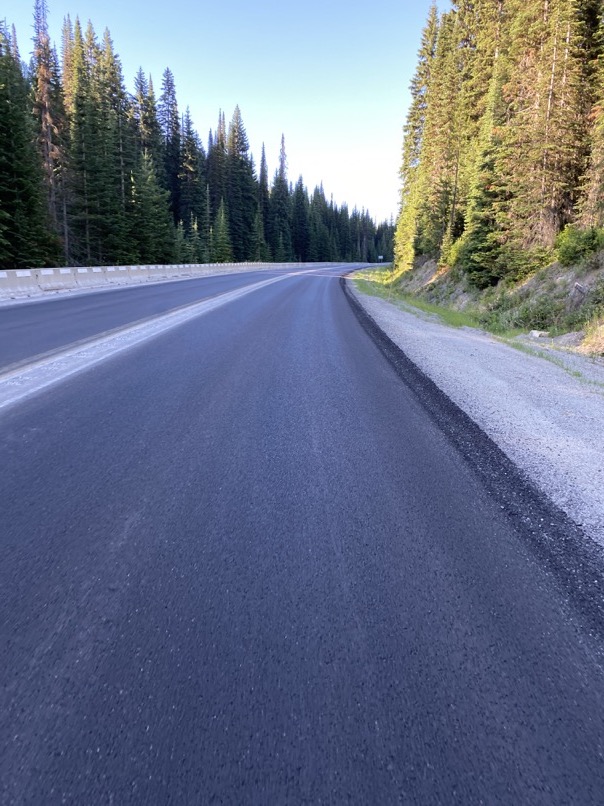 I had the whole place to myself. I started the descent and crossed into Idaho, knowing the rest of my day would be mostly downhill. 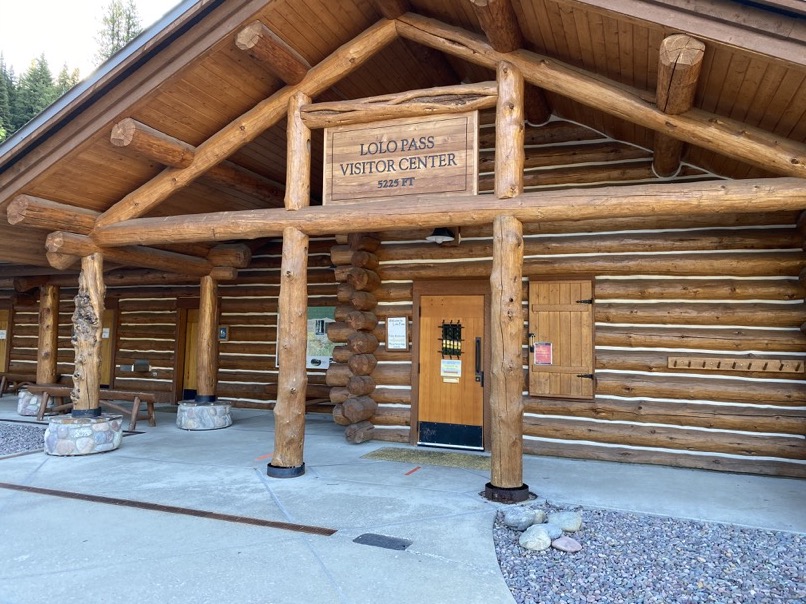 The descent from the top of Lolo Pass was exhilarating. No cars, beautiful views, and a fast descent. The descent tapered off but was still on a decline, following the Lochsa River. 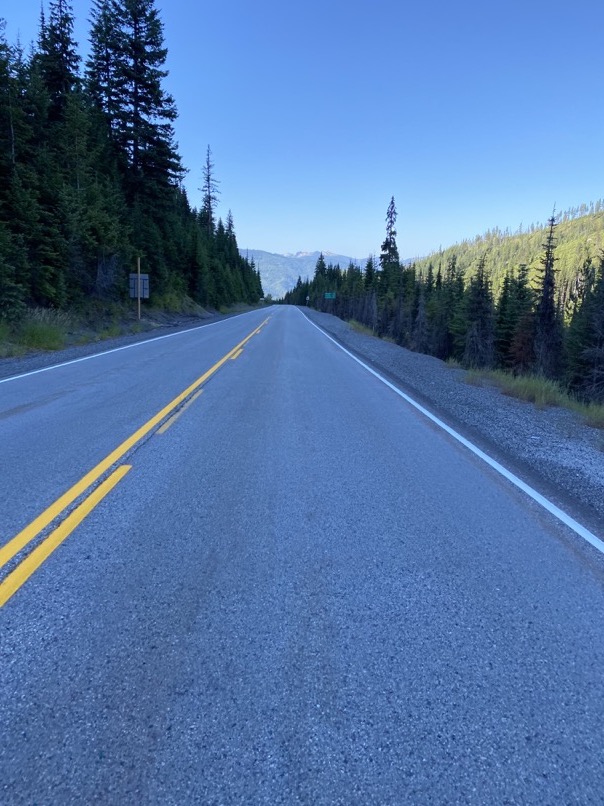 The roads and scenery seemed so familiar. A river, a forest, a beautiful road, and minimal cars. It was such a stark contrast to the barren, windy plains that I crossed through days prior. The Lochsa river turned into the middle fork for the Clearwater river in Lowell, Idaho. 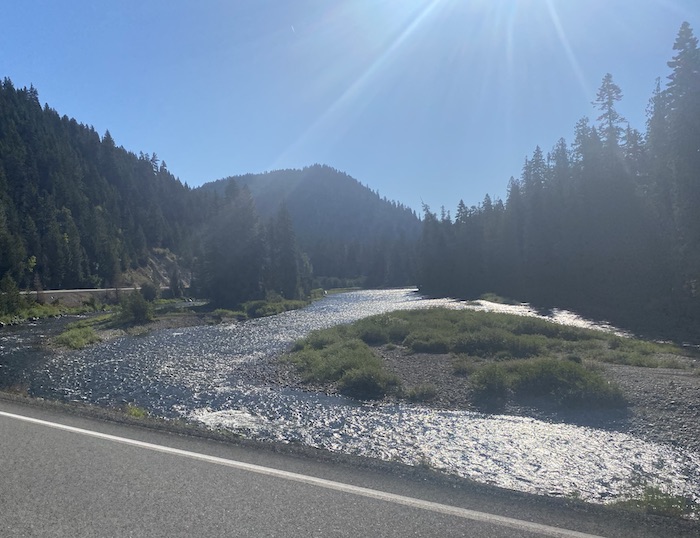 I stopped by a combination hotel and cafe next to the Welcome to Lowell sign, which had its population spray painted on, with previous population figures crossed out in favor of more updated numbers. This was the first stop in Idaho, where my only previous stop of the day was to refill water at the Lolo Pass visitor center. A group of motorcycles were stopped there to get lunch, who had passed me an hour back on my ride. I took all three of my water bottles inside and the person behind the counter immediately offered to fill them for me with ice. I bought some trail mix and other snacks they had along with a can of root beer. I ate them inside to take a break from the heat that was increasing in temperature as I descended into Idaho.

I was already at 100 miles for the day, but with the overall downhill slope of the ride, I wanted to keep going. One of the managers of the restaurant said I should have no problem making it to Kooskia, which was 35 miles away. I really appreciated that he said that. Throughout my trip, especially towards the beginning, I was a little tired of people being surprised when I told them I was biking to Oregon. I knew they had good intentions, but it introduced doubt in me as to whether it was a feasible idea. I hold nothing against the people who reacted this way, if anything it means I should’ve been more confident in my ability and planning. But the manager in Lowell was used to seeing bike tourers, so it was comforting to hear someone who treated my trip as if it wasn’t a big deal.

I continued along the Clearwater river into Kooskia. There was still no cell service, so I looked at the hotel options on the ACA map. I biked to one of the suggested hotels which looked questionable. I got close enough to the main office to get on their unprotected wifi so I could check reviews on Google Maps. I’m glad I did that because the reviews did not look good. There was a campground in town, but I had been on a hotel streak for a while now, and the thought of going back in a tent on such a hot day didn’t sound too good. Another place was on my map, three miles south in Stites. It said it was a lodge. It had great reviews on Google Maps, so I decided to add a few more miles to my day and finish with the longest day of my trip so far at 138 miles.

Stites was smaller than Kooskia. I pulled up at the lodge which had no office. It was a big, log cabin-like building with 4 rooms. There was a sign that said to call a number to get a room, and also had a special doorbell which called the number too. I didn’t have number, so I ran the doorbell. No one answered on the other side. I waited outside for a couple minutes and one of the guests walked by and into one of the rooms. I said hello, and he asked if I was trying to find a place to stay. He was the son of the owner, who then called his Dad to help me get a room for the night. The son walked me over to one of the entrances and let me inside. It turned out to be a full-on suite with a master bedroom, loft second bedroom, full kitchen, and laundry machines. I was feeling a bit spoiled but the room rate was cheaper than what I paid in Lolo for a Days Inn the night before. He said his Dad would be over in 15 minutes to check me in and get payment. I asked if I could take a shower before he came over. This was for the benefit of both of us, with it being such a hot day after biking 138 miles.

The son left, so I showered and unpacked some of my gear. The owner knocked on the door, so I let him in. He had me sign some papers and swipe my credit card on his phone. He gave me a discount out of the blue. I thanked him. I relaxed and did some laundry for the rest of the afternoon. I walked to the local grocery store to get some food for the next day. It was the weirdest grocery store I’ve ever been to. It was probably a full grocery store at one time, but it was starting to turn into an antique shop with a random assortment of food scattered all over the place. There were some clif bars and gatorade, but no muffins or other breakfast food. I walked across the street to get dinner. It was still hot outside - high 90s. I asked if I could sit outside, since nobody else was outside and everyone inside wasn’t wearing a mask. The hostess asked “Are you sure? I can easily seat you inside.” I declined, saying I don’t mind the heat. I ordered a burger to eat at the restaurant and then a chicken sandwich with fries as takeout for tomorrow’s breakfast. I went back to the grocery store after dinner and asked if they had ice cream. The only person working pointed at a freezer so I bought a couple ice cream cones to take back to the lodge. She was friendly. With it being Pacific time now, I called it an early night after heading back to the lodge and eating the two ice cream cones.