I was looking forward to today’s ride while planning my day last night. A lot of the roads were off of the main highway and looked like they were designed by a 5 year-old who liked to scribble a lot. The waitress at the bar last night had coincidentally suggested the road I would take out of Stites. I thanked her, knowing I was probably going to follow whatever my route said anyway.

The climbing outside of Stites started almost immediately. I knew it was going to be a hilly day and was looking forward to it. The road reminded me of some roads back in Oregon. Horribly steep with a beautiful view and only a couple cars to be seen. 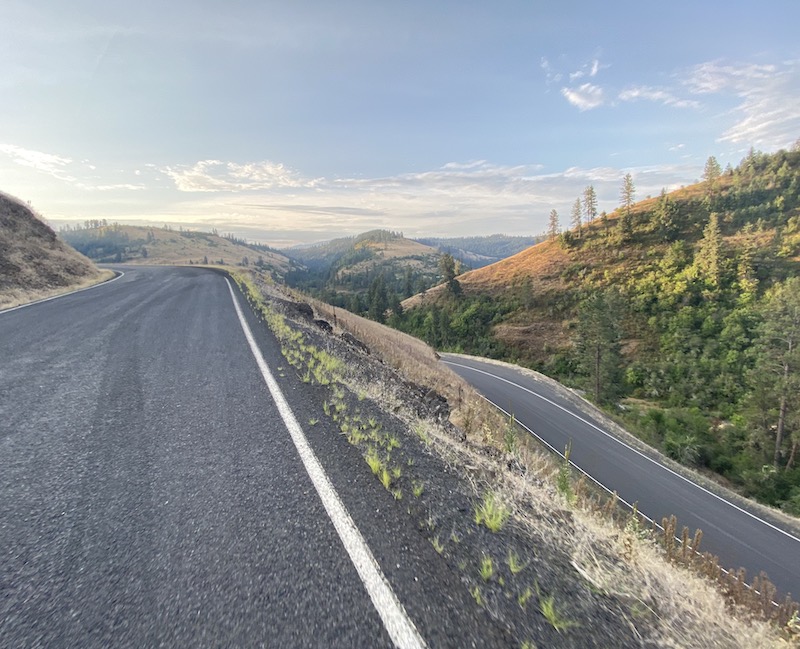 It was the first time I used my lowest gear on the whole trip. I grinded up the hill, passing by a house with a dog that ran out and chased me up the hill for a few seconds. Montana and North Dakota were the most challenging states so far, but at least they didn’t have any dogs.

Rolling into Grangeville, I pulled over to eat a clif bar. I was pretty exhausted and had only biked 20 miles, but Grangeville was 2,093 feet higher above sea level than Stites. I continued on the main highway for several miles before the TransAmerica route diverted to a backroad again. This time, it was gravel due to repaving work. It was bumpy, but there was no traffic. I started climbing again. This time it wasn’t as steep, despite the warning sign.

I made it to the top of White Bird Summit for the best view of the trip so far.

When I think of Idaho, I think of mountainous terrain covered in grass, and this view reaffirmed that thought. I ate another clif bar while enjoying the view. The backroad took me back to the main highway which I rejoined for a couple miles of downhill. The road was steep for a highway, so semi-trucks were going extra slow and I was catching up to them. The route had me turn onto old highway 95 and judging from the view, I knew I was in for some more downhill. I had seen this part of the route while planning yesterday and I didn’t know whether it would be going up or down, given all the curves. I try to plan my mileage but I often, probably foolishly, ignore the amount of climbing that I should expect on a given day. It's fun to keep it a surprise, at least on this route.

I pulled over to adjust my disc brakes for the first time this whole trip. I started what was one of the most fun descents I’ve ever done on my road bike. Lots of hairpin switchback corners and fast straights traversing the hillside. It seemed to go on forever. I eventually made it to the Town of White Bird and stopped by a grocery store to refill on snacks and fluids. I took a break at some shaded picnic benches next door to eat some crackers and drink chocolate milk, reflecting on all the climbing I had done so far and only being halfway through the day. I continued on my route, rejoining the main highway following the Salmon river towards Riggins. 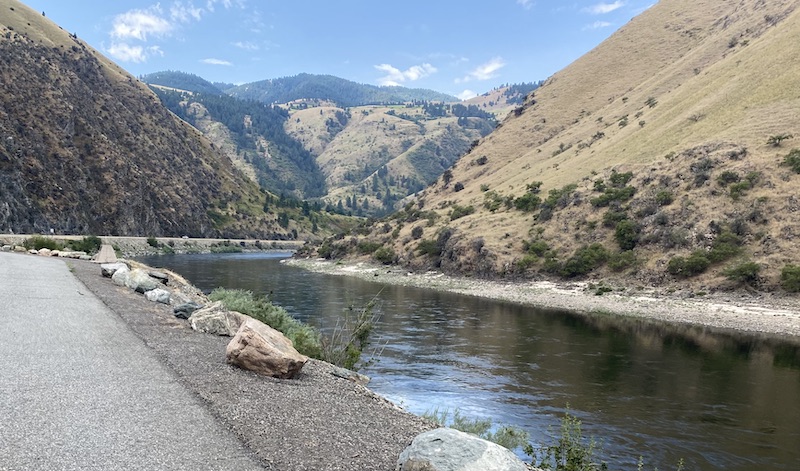 Although I was on the main highway, I felt so much safer than the main highways of the previous states. There was always a shoulder, the traffic was reasonable, and cars gave me extra space when given the opportunity. Biking next to a river felt like home too, reminding me of the McKenzie river that I would follow on my last day in Oregon.

I made it to Riggins, going back into the Mountain time zone. I saw a sign for milkshakes so I pulled over and went inside. If you answered the question of the day, you got a discount on your order. While the server was in the back making my huckleberry milkshake, I Googled the answer to the question on my phone: “What does the word espresso mean?” I made sure to leave a nicer tip after getting the discount. I sat outside and drank my milkshake in the adirondack chairs on the front porch. I biked to a gas station to refill on snacks and fluids. When I came back out, my rear tire was low on air. With nothing to hang my bike on, I took my rear wheel off and set my bike down in some dirt next to the parking lot. I accidentally laid my brand new, sticky, greasy chain in some dirt the consistency of moondust. It covered my chain like breaded food ready for a deep fryer. It felt stupid, but there was nothing I could do about it. I moved my bike to a different area to avoid further dirt. Flat tires add 20-30 minutes. I made sure to look through the tire thoroughly, spotting the thorn that gave me the flat. I put a new tube inside, put my wheel back on and was on my way. I was starting to get concerned that my rear tire was too worn out and was susceptible to more punctures.

I continued south along the Little Salmon River where I followed a gradual incline to New Meadows. I got a hotel and called their number since their office was closed.

They were doing contactless check-in. I was surprised as this was the best COVID precaution I had experienced so far, and it was in a small Idaho town. I checked into the hotel and then biked to a barbecue restaurant for some dinner and a beer after a big day on the road. 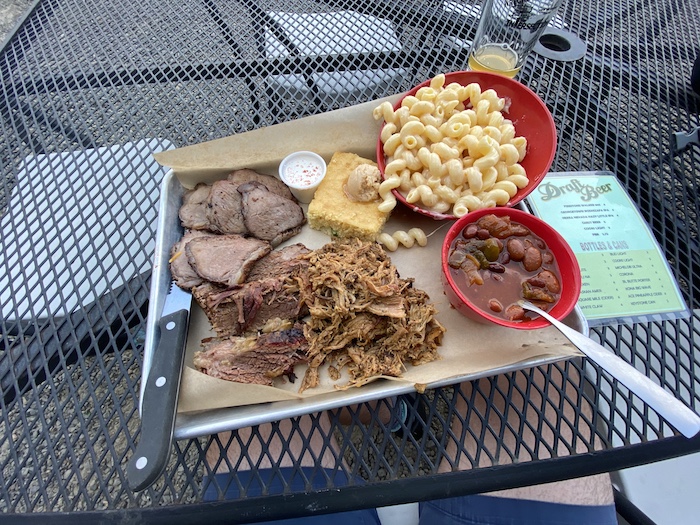 I stopped by a gas station to get some snacks. They had Two Towns cider, which is based out of Corvallis, Oregon. I didn’t get any, but it was another clue of how close I was getting to Oregon. The gas station didn’t have any packaged breakfast food, but they said they open at 5:00 and made breakfast sandwiches. I got some dessert and headed back to the hotel for the night.