Biking to Oregon: Day 21 - A Night in the Church

Another hot day in the forecast for today. I rejoined my route and, similar to yesterday, started going up another big climb towards Tipton Summit. Although the remaining days of my trip would involve big mountain passes, it was feeling much easier having lower traffic, prettier views, and less wind compared to earlier in my journey. I left early and saw only a few cars on highway 7 all the way to the highway 26 intersection. 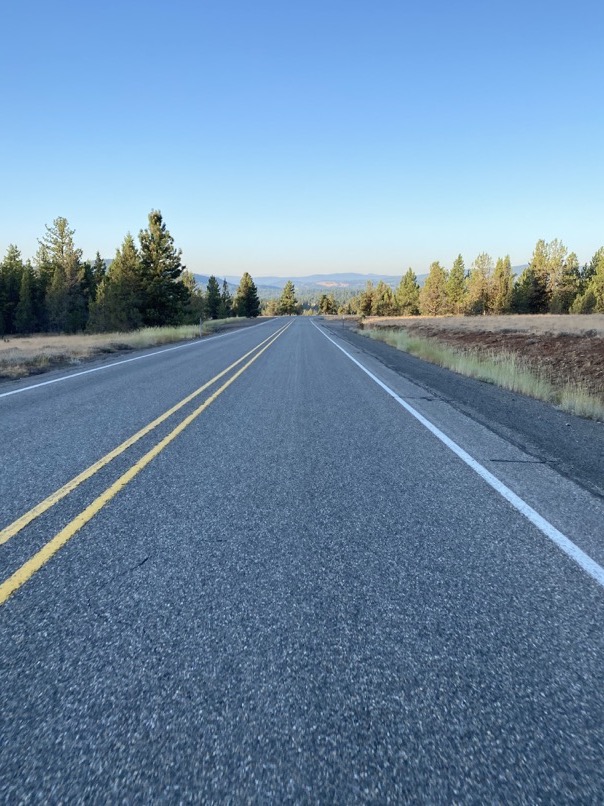 I stopped by the convenience store in bates that I had called the day before. They hadn’t opened yet, but they had a picnic bench and running water spigot outside, so I used the opportunity to top off my water bottles and eat a snack. Although I was joining a main highway and would be on it for the next couple days, I still felt safe since the traffic was minimal and the shoulder was generous. I went up another mountain pass, and this one felt bigger than the one I did earlier in the morning. After climbing turned into descending, the forest turned into a flatter, grassy landscape that I used to associate with all of eastern Oregon. I grew up in Oregon but I only really explored the Western half of the state.

While taking a break, I saw a church on my map in Dayville that was listed as COL: Cyclist Only Lodging. I called the number to make sure they were still open. The number was for a person that lived close to the church, and she said they were open and asked me to stop by her house first. When I arrived in Dayville, a couple towns over, I was glad I called ahead since there was no cell reception. I pulled over to look at my map and do my usual “should I stay here or ride further” internal debate. While internally debating, someone came out of an RV on the side of the road and gave my a cold bottle of water. It was close to 100 degrees, so I think this was a good sign to stay in Dayville for the night. 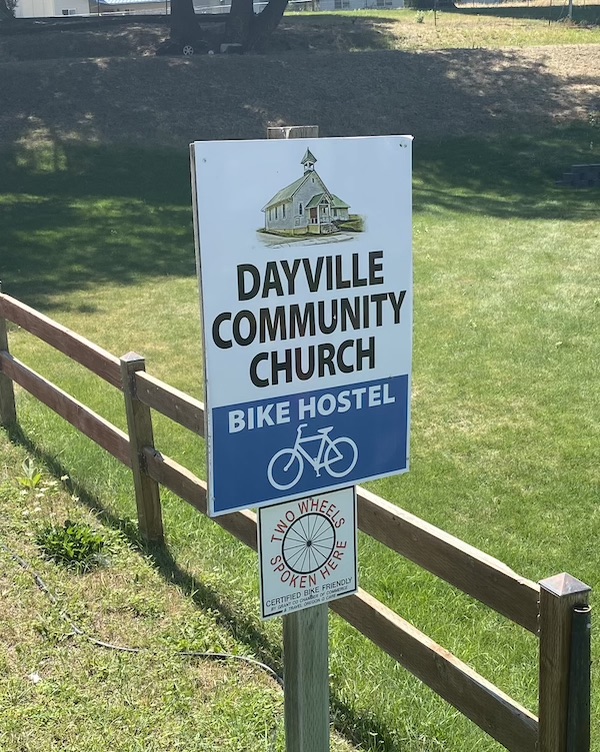 I stopped by the church person's house and she came outside and walked me to the church. She showed me the kitchen, stocked with some food. The laundry machines and the bathroom with shower. Binders of guest books from previous cyclists passing through, dating back to the 1970s. She said I could sleep anywhere in the roughly 40x70 foot area of the church. It wasn’t the main area of the church, but it seemed like it was used as a classroom or an area for church-related get togethers. 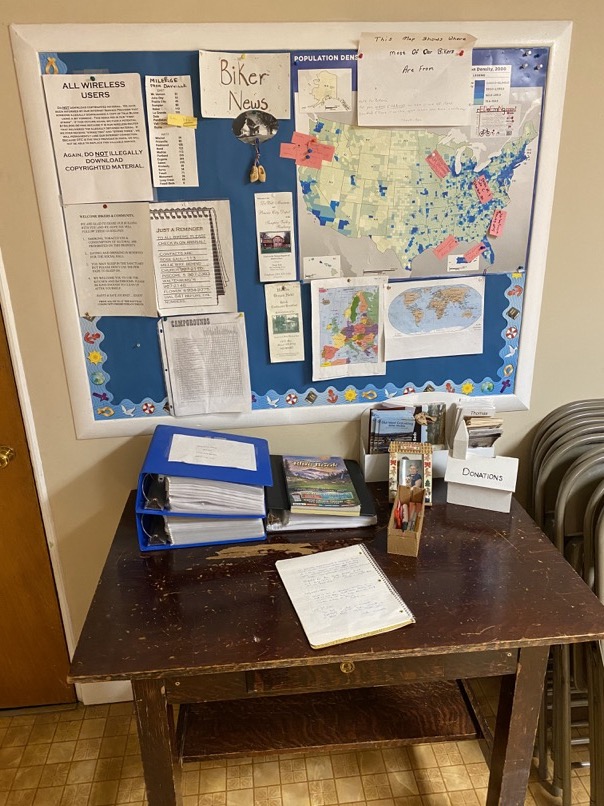 I thanked the church person for showing me around and she left. Nobody else was in the church. I sat down on one of the pews and looked at other lodging options for the night after getting on the church WiFi. An actual bed would be preferred, or at least a couch, since staying in the church meant setting up my sleeping pad on the ground. I was likely spoiled at this point after staying in hotels so often. There was an option in the middle of the town, and with the town being so small, it took me one minute to bike there. Nobody was in the main office, but there was a sign saying to call a number. I still had no cell service. I decided to go back to the church and take advantage of the free accommodations.

I showered and then went to a nearby cafe for lunch. In addition to getting a large blackberry milkshake and a sandwich, I saw they had Two Towns cider on tap. The owner offered to fill a small growler for me to take back for the night as long as I brought the growler back before I left town tomorrow. I agreed, ate my lunch, and then took my growler back to the church and put it in the fridge. I started some laundry, set up my sleeping pad and took a nap. The inside of the church had to be close to 90 degrees.

Later in the evening after getting dinner at another restaurant, I went back to the church to hang out and enjoy the cider. The church doors were always unlocked, and there were signs asking visitors to keep them unlocked for other cyclists and visitors. While I was hanging out, I heard a car pull up and someone came in the back of the church. It was a scruffy looking guy with a basket of laundry. He said he lives with his wife and kids off the grid, nearby Dayville. It sounded like his wife usually comes to the church to do laundry, so I pointed out where the laundry machines were. He was polite and didn’t want to disturb me, but I was friendly and made some small talk. Before I knew it, our conversation took a turn that made me realize I was talking to the type of person you see in flat earth proof videos. He talked about how the United Nations had planned out the pandemic last year. How the Sandy Hook school shooting was invented by the media. The dangers of 5G. He gave me some websites to look at so I can “see for myself”, and I’m probably on some governmental list now for going to those websites. I could sense he wanted to keep talking and I probably would’ve too if I wasn’t in the place I was going to sleep for the night. He eventually went in the bathroom to take a shower, which was much needed given that I could smell him from across the church. Afterwards, he took his wet laundry and left.

Shortly after that, someone else came in the church, from the front door this time. It was the church pastor who lived close to the church and saw the lights were on. He mentions he usually stops by to talk to the cyclists. We talked for 15 minutes before he left. It was time for bed now. I was happy to talk to the friendly locals, but I turned off the lights and hoped there would be no more visitors for the night. I left the church windows open since it was hotter inside than outside.